New London is gateway to Connecticut’s next great maritime industry 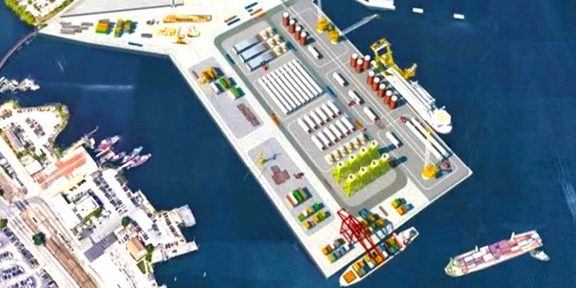 With the recent signing of a deal between the City of New London and Ørsted and Eversource to redevelop State Pier, Connecticut is now poised to launch its next great maritime industry and transform the state’s and New London’s economy for decades to come.

The deal paves the way for the redevelopment of State Pier, with construction starting as soon as this summer. It provides $5.25 million, or $750,000 annually, to the city for seven years, including during the construction of Connecticut’s first offshore wind farm, Revolution Wind.

Combined with other Connecticut Port Authority and Gateway Terminal payments, New London will realize more than $1 million per year for the initial seven-year period. During that time, State Pier will support at least two additional wind farms in the region, which collectively will provide enough clean energy to power more than 900,000 homes in the Northeast, including Connecticut.

As municipalities across the state continue to grapple with the economic impact of the pandemic, an infusion of capital like this will go a long way in supporting other critical services and initiatives in New London in the coming years. The total award from Ørsted and Eversource is six times the $125,000 in annual state PILOT funding the city has received in recent years from State Pier. The deal also stipulates that revenues for New London will increase if additional offshore wind projects are staged from the facility. Should that happen, the benefits could almost double to more than $9 million.

And as construction kicks-off this summer, the project will generate more than 400 new local construction jobs, and the ripple effect will be felt throughout New London. These workers will boost local establishments within the vicinity of the port at a time when small businesses need the support.

Over the long run, this offshore wind project work at State Pier, expected starting in 2022, will create more than 100 annual pre-assembly positions with average salaries of $70,000. It will also create thousands of other indirect and induced jobs for the region, further cementing New London’s place as a hub for the $70 billion offshore wind industry that is estimated to produce up to 83,000 jobs by 2030.

Ørsted and Eversource are investing significantly in State Pier, a state asset that will remain in Connecticut’s hands to own and maintain now and in the future. Once it is transformed into a modern, heavy-lift facility, it will be capable of supporting a broader range of cargo opportunities than it previously handled, which means more annual vessel calls and increased economic activity. State Pier will be marketed and available for other uses when it is not used for offshore wind, delivering more benefits and creating a win-win-win for the city, the region, and the state.

The Ørsted and Eversource venture is investing $77.5 million toward the project’s overall cost, plus $2 million per year in annual lease payments to the state. Neighboring states are making substantial investments in port infrastructure on their own to support the offshore wind industry. New York is investing $200 million in port improvements for offshore wind and signed a 2.5 gigawatt power purchase agreement to do so. New Jersey is offering to put up $400 million to attract a facility comparable to the one planned for State Pier.

Eversource has long been committed to local economic development and investment in New London. As the city’s hometown energy provider, Eversource has provided Community Impact Grants, Neighborhood Assistance Act donations, Housing Tax contributions to support the development of affordable housing, COVID-19 relief, and energy efficiency programs that help municipal properties and city residents and businesses save money. Together with Ørsted, it opened an office in downtown New London in 2019 and worked to ensure that the city and the region had the tools to grow alongside the offshore wind industry.

New London is now on track to become a regional epicenter for the offshore wind industry as the redevelopment of State Pier advances. Our companies look forward to a long-term partnership with New London that will be an economic catalyst for the city and the region while delivering the benefits of clean energy to Connecticut and beyond.