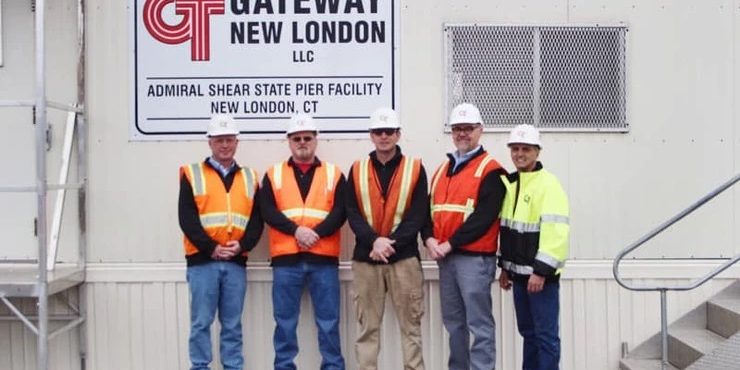 New London, CT – The Connecticut Port Authority (CPA) has reached an agreement with Gateway New London LLC for the long-term operation of State Pier in New London. The decision comes after a rigorous competitive selection process designed to determine the highest and best use of State Pier and to find a partner with the capability to deliver expanded economic opportunity to the state.

Under terms of the 20-year agreement, Gateway assumes operation of State Pier on May 1, 2019, with an option at the end of the term for the CPA to extend for two additional ten-year periods. The new contract requires that an annual fixed fee of $500,000 be paid to the CPA, increasing by $250,000 every five years. The CPA will also receive a variable fee of 7% of Gateway’s gross revenues at State Pier, with a minimum annual guarantee of $500,000 that has the potential to increase every five years based on Gateway’s percentage increase in gross revenues. Finally, Gateway will pay an annual wharfage and dockage fee equal to 50% of all wharfage and dockage user fees at State Pier. All together, these terms will provide CPA with a substantial increase in revenue versus the current operations.

“We look forward to working with our new partners to increase the movement of conventional cargo through our ports, while simultaneously capturing the opportunities presented by emerging markets,” Bates continued. “This is a welcome balance as we look to better leverage Connecticut’s unique maritime assets. We are confident this selection presents the best future for State Pier and the taxpayers of Connecticut.”

This agreement presents an opportunity to expand the port’s role as an economic driver by increasing the overall traffic flowing through this key point of entry. Businesses and workers around the state will benefit from greater access to valuable markets.

“After months of effort on behalf of the CPA staff and Board, we are pleased to partner with Gateway on the continued development and expansion of State Pier,” said Evan Matthews, Executive Director of the CPA. “The CPA and Gateway have undertaken an extensive process to maximize outcomes and potential, and we see this partnership as the next step towards fulfilling a key objective of our 2018 Maritime Strategy.”

Maximizing the potential of State Pier is the top priority of the 2018 Connecticut Maritime Strategy, released by CPA earlier this year. In support of that strategy, the CPA will work closely with Gateway to invest the funds provided through the recent Purchase Power Agreement and Zero Carbon initiative to make the pier even more attractive to the offshore wind industry and other emerging opportunities in the region.

“We are excited to partner with the Connecticut Port Authority to operate and expand State Pier,” said Larry Smith, founder of Gateway Terminal. “Our partnership not only positions New London as a potential offshore wind hub for the northeastern United States, but also supports the local harbor community and existing uses, which we believe will expand when we begin our operations.”